View all lessons
The fundamentals of Python programming for machine learning. 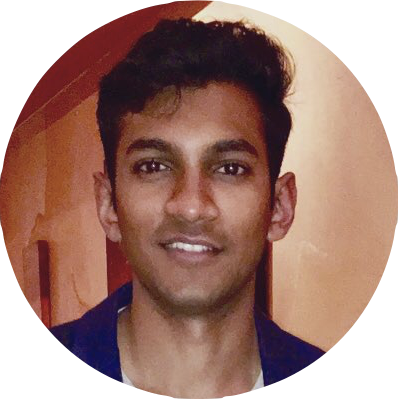 Variables are containers for holding data and they're defined by a name and value.

Here we use the variable name x in our examples but when you're working on a specific task, be sure to be explicit (ex. first_name) when creating variables (applies to functions, classes, etc. as well).

We can change the value of a variable by simply assigning a new value to it.

There are many different types of variables: integers, floats, strings, boolean etc.

We can also do operations with variables:

We should always know what types of variables we're dealing with so we can do the right operations with them. Here's a common mistake that can happen if we're using the wrong variable type.

Lists are an ordered, mutable (changeable) collection of values that are comma separated and enclosed by square brackets. A list can be comprised of many different types of variables. Below is a list with an integer, string and a float:

We can add to a list by using the append function:

and perform operations with lists:

Tuples are collections that are ordered and immutable (unchangeable). We will use tuples to store values that will never be changed.

Sets are collections that are unordered and mutable. However, every item in a set much be unique.

Indexing and slicing from lists allow us to retrieve specific values within lists. Note that indices can be positive (starting from 0) or negative (-1 and lower, where -1 is the last item in the list).

What happens if we try to index beyond the length of a list?

Dictionaries are an unordered, mutable collection of key-value pairs. You can retrieve values based on the key and a dictionary cannot have two of the same keys.

Sort of the structures

See if you can recall and sort out the similarities and differences of the foundational data structures we've seen so far.

But of course, there is pretty much a way to do accomplish anything with Python. For example, even though native dictionaries are unordered, we can leverage the OrderedDict data structure to change that (useful if we want to iterate through keys in a certain order, etc.).

We can use if statements to conditionally do something. The conditions are defined by the words if, elif (which stands for else if) and else. We can have as many elif statements as we want. The indented code below each condition is the code that will execute if the condition is True.

When the loop encounters the break command, the loop will terminate immediately. If there were more items in the list, they will not be processed.

A while loop can perform repeatedly as long as a condition is True. We can use continue and break commands in while loops as well.

We can combine our knowledge of lists and for loops to leverage list comprehensions to create succinct code.

For the nested for loop below, which list comprehension is correct?

Functions are a way to modularize reusable pieces of code. They're defined by the keyword def which stands for definition and they can have the following components. 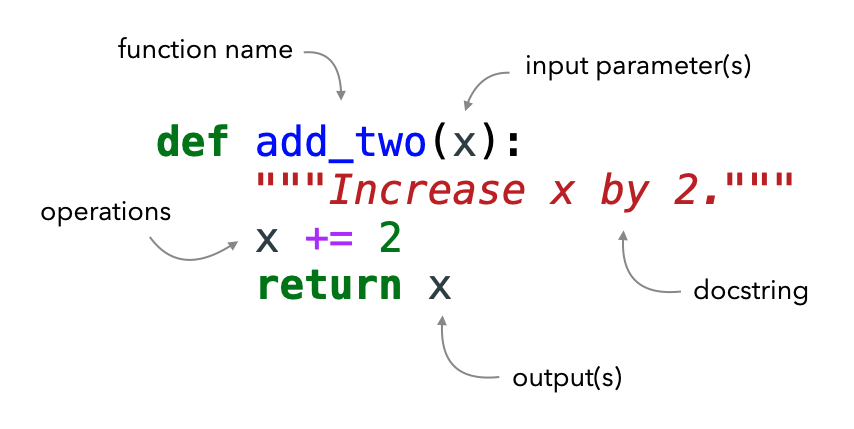 Here are the components that may be required when we want to use the function. we need to ensure that the function name and the input parameters match with how we defined the function above.

A function can have as many input parameters and outputs as we want.

We can be even more explicit with our function definitions by specifying the types of our input and output arguments. We cover this in our documentation lesson because the typing information is automatically leveraged to create very intuitive documentation.

Classes are object constructors and are a fundamental component of object oriented programming in Python. They are composed of a set of functions that define the class and it's operations.

Classes can be customized with magic methods like __init__ and __str__, to enable powerful operations. These are also known as dunder methods (ex. dunder init), which stands for double underscores due to the leading and trailing underscores.

The __init__ function is used when an instance of the class is initialized.

The print (my_dog) command printed something not so relevant to us. Let's fix that with the __str__ function.

We'll be exploring additional built-in functions in subsequent notebooks (like __len__, __iter__ and __getitem__, etc.) but if you're curious, here is a tutorial on more magic methods.

Besides these magic functions, classes can also have object functions.

We can also build classes on top of one another using inheritance, which allows us to inherit all the properties and methods from another class (the parent).

Notice how we inherited the initialized variables from the parent Pet class like species and name. We also inherited functions such as change_name().

Which function is executed?

Which function is executed if the parent and child functions have functions with the same name?

There are two important decorator methods to know about when it comes to classes: @classmethod and @staticmethod. We'll learn about decorators in the next section below but these specific methods pertain to classes so we'll cover them here.

A @classmethod allows us to create class instances by passing in the uninstantiated class itself (cls). This is a great way to create (or load) classes from objects (ie. dictionaries).

A @staticmethod can be called from an uninstantiated class object so we can do things like this:

Recall that functions allow us to modularize code and reuse them. However, we'll often want to add some functionality before or after the main function executes and we may want to do this for many different functions. Instead of adding more code to the original function, we can use decorators!

Suppose we have a function called operations which increments the input value x by 1.

Now let's say we want to increment our input x by 1 before and after the operations function executes and, to illustrate this example, let's say the increments have to be separate steps. Here's how we would do it by changing the original code:

We were able to achieve what we want but we now increased the size of our operations function and if we want to do the same incrementing for any other function, we have to add the same code to all of those as well ... not very efficient. To solve this, let's create a decorator called add which increments x by 1 before and after the main function f executes.

The decorator function accepts a function f which is the function we wish to wrap around, in our case, it's operations(). The output of the decorator is its wrapper function which receives the arguments and keyword arguments passed to function f.

We can use this decorator by simply adding it to the top of our main function preceded by the @ symbol.

Suppose we wanted to debug and see what function actually executed with operations().

The function name and docstring are not what we're looking for but it appears this way because the wrapper function is what was executed. In order to fix this, Python offers functools.wraps which carries the main function's metadata.

Awesome! We were able to decorate our main function operation() to achieve the customization we wanted without actually altering the function. We can reuse our decorator for other functions that may need the same customization!

This was a dummy example to show how decorators work but we'll be using them heavily during our MLOps lessons. A simple scenario would be using decorators to create uniform JSON responses from each API endpoint without including the bulky code in each endpoint.

Decorators allow for customized operations before and after the main function's execution but what about in between? Suppose we want to conditionally/situationally do some operations. Instead of writing a whole bunch of if-statements and make our functions bulky, we can use callbacks!

We can pass in as many callbacks as we want and because they have appropriately named functions, they will be invoked at the appropriate times.

What's the difference compared to a decorator?

It seems like we've just done some operations before and after the function's main process? Isn't that what a decorator is for?

Putting it all together

decorators + callbacks = powerful customization before, during and after the main function’s execution without increasing its complexity. We will be using this duo to create powerful ML training scripts that are highly customizable in future lessons.